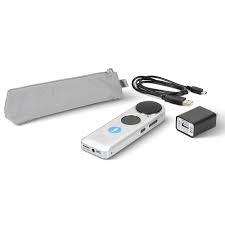 Hammacher Schlemmer’s Live Conversation Speaking Translator provides two-way verbal communication between people who don’t share a common language. According to the company, unlike text translators that require users to stop and enter each sentence word for word, this device automatically translates a spoken phrase or sentence and “speaks” the translation to the other person. It reportedly verbally translates 33 languages, including French, Italian, Japanese and Spanish, and provides text translation for 19 additional languages, including Arabic, Bulgarian and Greek. The device charges via AC and has built-in language learning flashcards. “It can be intimidating to visit a foreign country and not be familiar with the language,” explains Hammacher Schlemmer General Manager Nick DiMarco. “This translator helps eliminate that stress by providing a simple way to communicate across every continent.” The Live Conversation Speaking Translator is available from Hammacher Schlemmer for a retail price of $349.95. Hammacher Schlemmer is an exhibitor at the upcoming R&R Expo in Galveston, May 8-9. Click here for info.
Contact:
Trish Hammond
847-581-8987
pr@hammacher.com.
Brand Media Resources